Our travels while visiting supporting congregations has taken us to some varied places. This past week we left Brisbane city behind us, driving west for around three hours as we headed to Bell to meet with folk from the local Presbyterian church.

Early on the Sunday morning there was a gathering of a different kind on our hosts’ back lawn – a fledgling rainbow lorikeet with a number of apostlebirds. The latter group were not behaving in a welcoming and outreaching manner as their name may suggest, but attacked the young interloper as it struggled to get airborne with its immature feathers. The lorikeet managed to claw and hop its way to the top of a large shrub, avoiding sniping attacks the whole time, but glided to the ground again after attempting to fly, making it an easy target for the surrounding apostlebirds. 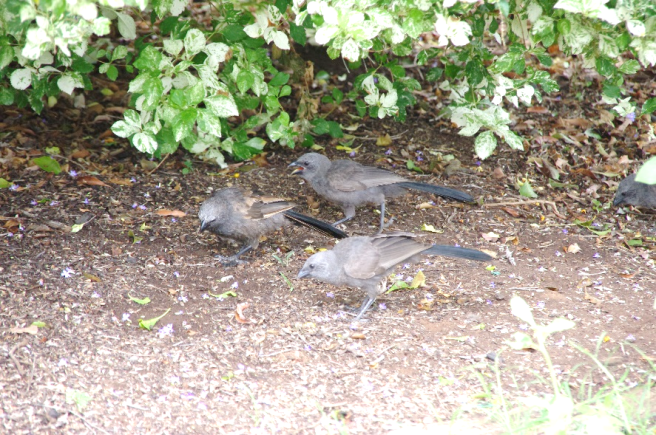 Creation (what many love to call ‘Mother Nature’) often shows itself to be anything but motherly, with the default being fairly cruel and certainly hard on the weak and helpless. Thankfully our bird-loving host intervened, and we secured the poor thing in a towel before bundling it into a cardboard box. This gave time for the lorikeet to calm down and recover, while its attackers lost interest and moved on.

The message we delivered in church that morning was of the need for the Australian church to be praying for their global brothers and sisters, and not to feel separated by cultural differences, or confused as to the needs of Christians in other countries. Colossians 1 reminds us of the real spiritual needs we can always be praying for – whether for Christians in PNG, Africa or alongside us in church.

Praying in this way may take a shift in our thinking. We can easily be like the apostlebirds and give quality time for the prayer needs of ourselves and our immediate circle, while caring little for those who are ‘different’. Paul makes clear in Colossians that those differences will amount to nothing. Together we ‘share in the inheritance’, have all been ‘rescued… from the dominion of darkness and brought … into the kingdom of the Son’. [Colossians 1:12,13]

Please pray for Christians in PNG, that they may be filled with the knowledge of God’s will and live lives worthy of Him. [Colossians 1:9,10]

keith - elspeth _ campbell @ wycliffe . org . au To email us please type the above email address without the spaces. Thank you. View all posts by Keith and Elspeth Campbell