We were not sure wha

t to expect from a nationally prescribed day for repentance. The link between national identity and the Christian faith is strong in Papua New Guinea, yet many readily admit that the personal, individual commitment to godly living often does not accompany the profession of being a Christian. There were over 1000 people at the event, but that represents a small proportion of the entire Lae community.

Yet it is that very issue that lies at the heart of Repentance Day (August 26). It is as much for Christians to lament the spiritual state of their PNG brothers and sisters as it is for a personal expression of grief over sin.

Crowds assembled in groups according to region – highlands, lowlands, and the islands – and specific community groups such as leaders in the church and society, and students of schools and universities, were brought to the front at times for covering in communal prayer.

The nationalistic approach to repentance should not seem that strange a concept to us. It is a recurring event in the days of Israel under various kings. Hezekiah’s spiritual reforms in Israel followed the rule of his idolatrous father, King Ahaz, who offered his children as sacrifices and permanently shut the doors of the Lord’s temple.

Hezekiah sent word to all Israel and Judah and also wrote letters to Ephraim and Manasseh, inviting them to come to the temple of the Lord in Jerusalem and celebrate the Passover to the Lord, the God of Israel.       2 Chronicles 30:1

The people destroyed the idolatrous altars, and rejoiced greatly as the Passover offerings were made “And the LORD heard Hezekiah and healed the people.”  (2 Chron. 30:20)

Our Australian culture tends toward a more

private and personal expression of spirituality in general, particularly in the area of repentance. Yet the PNG way is to live in community, and the process of grieving over sin is no exception.

They feel deeply the circumstances of many of their people – struggling without a job or suitable housing; trapped in alchohol and drug abuse; families under strain – and understand the spiritual issue that underlies these problems.

Like Hezekiah, the Lae Christian community gathered this day to seek the Lord’s healing for their people, knowing that their prayers will be heard by the One who promises “Come to me, all who labor and are heavy laden, and I will give you rest.” (Matthew 11:28) 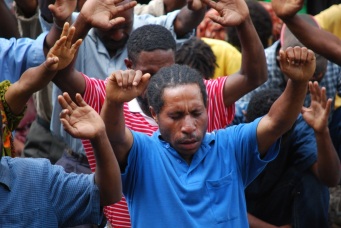 Instituted in 2011 by Prime Minister Peter O’Neill, Repentance Day on August 26 is to prompt the people of PNG to seek God’s forgiveness for the collective sins of the nation, and to consider their own role in restoring relationships within families and the community.

Here at the Lae Centre, we had a valuable learning experience this week. With some new staff, and a rearrangement of duties, tensions arose on Tuesday over how work was to be done. As managers we planned how to address the situation and I prepared a stirring talk drawing on Ephesians 4 and 1 Corinthians 12 to encourage unity and functioning as one body.

Our maintenance man led the Wednesday morning devotion time, sharing from Psalm 51 on the need to repent humbly before God for our sin to be dealt with.

First he, then other staff, humbly confessed that their attitude towards others on Centre had not been honouring to God in recent days, and sought forgiveness from the team. Tears were shed; handshakes and hugs exchanged.

God is so much better at restoring brokenness than we are!

One year ago t

It feels like so much has happened – new and exciting experiences, physical and personal challenges, and many times that caused us to marvel at God’s grace. In all this time we have, with few exceptions, maintained a hectic pace, and the year has flown by. This naturally leads to contemplating the time we have left on this posting.

To be serving overseas involves coping with an existence across two worlds. We have the daily reality of our life and ministry here in Lae while continuing to process the events of regular life back in Australia. The next twelve months see us approaching the time of returning to friends and family and the comfort of familiar surroundings and routines. We will be re-connecting with our home church and renewing the relationships we miss so much.

Yet there is the awareness that the task God has given us is far from complete – there is much to be done and our focus needs to be on advancing the work of Bible translation in PNG. Jesus had some tough words for those with ‘double vision’ when it came to serving Him.

When ploughing the ground, looking back – or for that matter looking to far ahead to the distant untilled field – can only result in going off course, particularly in the days of equipment pulled by oxen. In many PNG gardens, not being attentive could result in a painful tumble down a mountain!

We are trusting God to guide us over the coming year, and beyond as we continue to serve wherever He takes us.